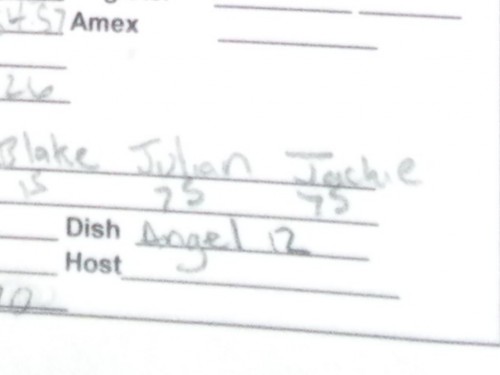 I decided to stand up to a popular Downtown eatery that had grown accustomed to illegally deducting a portion of the wait staff’s tips.    I did this because I was frustrated with the number of  restaurant owners who blatantly ignored the law and thought they were entitled to cut corners.  I also did this   to test the system and see if these agencies were doing their job of enforcing the laws.  I wish I could spin a tale of workers rushing to my side or government agencies truly enforcing these rules. The truth was while I did gather support from workers from all over the city many of them were these single parents trying to support their families with the tips they earned,who simply  couldn’t afford the risk of losing their jobs, or becoming blacklisted. Santa Fe is a small city and many feared they would not find work again if they spoke out. And some state workers I spoke with never heard of the tip credit before or what FLSA had to do with tipped workers.

And while I  have written op-eds for the paper and created posts in my blog, I suddenly found myself in a job where the employer openly stole tips.  My first instinct was just to quit.  But it was the middle of winter and I found myself also just resigning to the conditions.   But my partner pointed out to me this would be a great opportunity to see if all these pretty little rules and regulations really do work.   Since I was only in school part time  I could afford to take on the task of challenging these illegal practices  and also meet my responsibility to act on all the information I urged my blog readers to act on.   I  knew I would feel like a hypocrite writing about these laws if I didn’t do anything about it myself.

So I stayed at the job for roughly another 3 weeks. It was a rough ride. A arduous process  I wouldn’t wish upon anyone.

This employer penalized the staff ahead of time for any mistakes that could occur in the future. They took  on average $10 to $15 per day from the pooled tips of the waiters and runners for what they called a “error account.” The mistake could be food that was sent back, a customer walking out, mistakes on bills or servers dropping plates.  They kept this fund locked away in a safe and if no mistakes were made, the money left over went towards buying new glassware or candles.  And of course, they did not claim the money they were deducting from the pooled house.  Instead they reported the wait staff received a higher amount of tips then they actually did receive. This meant I was paying income tax on tips I actually wasn’t receiving.

They also took the full tip credit, payed their tipped employees only $2.13 and still required that tips were to be shared with non-tipped workers in the kitchen such as the dishwasher.

Before I went to any outside agencies, I decided I would try to resolve the issue with the owners themselves.  Sometimes, restaurant operators are simple ignorant about local laws and If I could resolve it with them first, that would be the best option.  So I tried first with the managers. I was told this was simply how they do it and one longtime waitress and friend of the owners piped up that it was the owners way of teaching his wait staff a lesson.

So the following week, after my shift,I approached one of  the owners in the office.  I was promptly told that this was their restaurant, this is how they have always done things and if I didn’t like it too bad.  So I quit, handed her a letter of resignation and began my process with State Wage and Hour.

At my hearing, I won back my earnings for the error account, and time spent in training. When there are no opportunities to make tips such as during training or wine education events, employers are not allowed to take a tip credit.  The state forced them to pay the difference and applied the treble law, which meant I was able to recover three times the amount they took.  The state however, did not enforce the FLSA and the tips I shared with the dishwasher were not recovered.  The employer also tried to establish that the dishwasher was also a busser because he occasionally bused a table.  (Not once, while employed there did a dishwasher ever buss any of my tables). She also added that the error account balance was used to throw a big party at the end of the year. (NOT TRUE)

The next agency I went to was unemployment.  Initially, I lost my claim.  But then, three months passed and I won my appeal.  The judge agreed with me that these illegal deductions for the error account was “good cause” to quit. The judge states, “The determination of the claims examiner is reversed. The claimant was not subject to disqualification from benefits under Section 51-1-7a(1) of the act.

That meant I was paid for the 5 weeks I was unemployed while I looked for work.  It also meant the restaurant would be subject to potential benefit charges. Hopefully, a motive for them to stop stealing tips. Un happy with the judges decision, the owners decided to appeal again to the Secretary of Labor. Thier appeal was denied and the Secretary upheld the judges decision.

My final claim was with the Federal Wage & hour. My experience with them was not encouraging. They are understaffed, and difficult to work with.  They refused to take any evidence from me, conducted their own shoddy investigation and sided with the employer that  the dishwasher was entitled to a daily portion of my tips, since he occasionally bussed tables.  They informed me that my only recourse  was to hire a attorney to recover wages under the FLSA.

What I learned,  Do not bother going to Federal Wage & Hour.  Instead just hire a lawyer.  In my case, it wasn’t worth hiring a lawyer. I was satisfied just learning about the process of working with Federal wage and hour.

The only way to make change is to support one another. Change does involve risk.   It requires courage  to be witnesses for one another.  Because I had no one willing to be a witness, ( they were afraid of being black listed)  I had no evidence to prove the dishwasher was not bussing tables. The employer probably prepped the dishwashers for the investigation and promptly started having the wait staff sign waivers for the error account.

I also understand why most people will not stand up. You have to pick your battle.  There are some infractions that are simply not worth the headache. But open blatant stealing is another matter. Sometimes, an employer may go to far and you may decide its  worth taking action. I found that it is a awkward, time consuming process to gather evidence, organize dates and times for a hearing.  One I will not repeat myself. But I don’t regret going through it as I learned quite a bit about the way the system works.  Again it is a process that requires support, but can be  ignited  with one person.

You can screen employers for these shady practices  and ask ahead of time now. What is your tip pool policy? If  it is shady,  simply discontinue with the application process.

And sometimes you may encounter shady practices after you are hired.  While its a personal decision to take action, if anyone wants conditions in the industry to change the most important thing is to band together. There are hardly any unions left and the government agencies in place are often understaffed and underfunded.     If people support and educated one another, then employers may start to listen and finally wise up.

View all posts by Wiser Waitress →
National Restaurant Association files suit against U.S Dept of Labor
The up and up on ZIPTIP