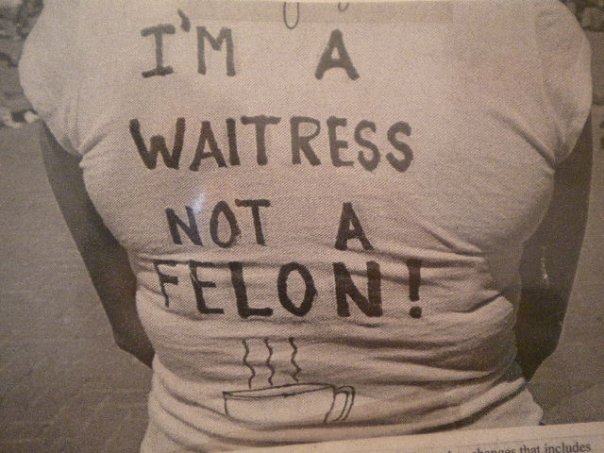 Photo by Valerie j. Cochran. For more photos go to

Today, a New Mexico  food server  can still be charged with a fourth degree felony for serving or selling alcohol to a underage minor.  However, for the same offense, a food server would only receive a misdemeanor in almost every other state.

And being convicted of a 4th degree felony can have a huge impact on your civil rights.  Your immigration status can be jeopardized, your voting privileges suspended, and your right to bear arms revoked.  So its always a good idea for anyone serving alcohol to be aware of the local liquor ordinances and liabilities they may face- as there is a great variation  in dram shop laws and regulations across the country.

Under dram shop liability laws, a party injured by an intoxicated person can sue establishments including bartenders and servers that contributed to that person’s intoxication.

What that means is that at some point in your hospitality career, if you don’t want to face a conviction, or live with the Karma that the annoying drone you let drive away drunk has now killed and wiped out an entire  family, you are most likely going to encounter a situation where you will be called upon to baby sit.

The state you work in may require you to attend  a mandatory alcohol training  course where you will explore various babysitting techniques for your drunk adult customers.

RBS or Responsible  Beverage Service programs were first started in the early 1980’s, by MADD (Mothers against drunk driving). RBS programs were designed  to educate servers about strategies to avoid selling alcohol to underage youth or intoxicated patrons.  States that require mandatory RBS training usually require that you pay a fee $30-50, attend a 3 hour class with a quiz and re certify every 3-5 years.

The  3 hour video you might be forced to watch will most likely have been shot in the 1980’s and will feature actors demonstrating sobering up tactics such as offering greasy food, or slowing down service. They will also address liability issues,  how to recognize  the signs of intoxication,  how to cut someone off and most importantly how to keep them from climbing in their car until they sober up or you can secure a safe ride home for them.   Although mastering these babysitting techniques can be a thankless task met with whining,  no tip and someone camping in your section all night, it is a essential part of waiting tables.

But  in addition to learning these standard text book approaches, you will also need to be armed with grace, patience  and possibly a drivers license..   Your approach to cutting off a regular might need to be different than cutting off the  tourist  simply passing through town.  Kaye, a waiter with more than 30 years experience likes to firmly, but gently let her customer know, who asks for a drink too many that she doesn’t think its a good idea and will suggest something soft to drink.  And because Kaye is able to deliver her suggestion with a  complete lack of  judgment and undertone of respect, most folks just melt under her motherly approach and often will even thank her afterward.

One factor educational videos fail to address is that cutting off regulars will sometimes require embracing them like family. If you work at a remote resort or rual area with no public transportation You will need to become familiar with the local village drunk and  the phone numbers of friends or family that are willing to pick them up and if not, you may end up becoming  the “public transporation.”

With the exception of some cities,  public transportation in the U.S.  is poor. Unlike Europe where you can find a pub in the middle of  nowhere, Its not unheard for people in the US to sometimes drive more than 30 miles to have a beer. Thanks to Dry counties, a shortage of liquor licenses, and left over sentiments of the prohibition era, people are forced to drive drunk longer.   Catholic priests who settled in  New Mexico,  produced some of the first winery’s in the country, beating California by 400 years. But with the juice also came the stigma and today obtaining a package liquor license in NM is next to impossible or at too high a cost for local small town merchants in remote areas to even ponder, let alone finance.   So waiters who work in  these states that are mostly rural like New Mexico, or Wyoming can face a bigger challenge than urban servers who can just simply throw some one in a cab.   And urban servers should take advantage of some of the free shuttle services offered by some  of the local breweries in their area.   In St.Louis for example, Budweiser offers a free shuttle home  for the customer as well as a free ride back to their parked car the following day.

But regardless of these services offered,  most of us servers already have or probably will at some point over serve our customers , especially if we know they only have to stumble back to their hotel room or we can chuck them in a taxi. However, its when we get too careless that we can face potential liabilities and contribute to harming the community.  It is especially important to remember in these moments, even if we are unfairly pawned in a liability scheme,  that we are still much more than order takers, yielding perhaps a heavier hand in destiny than we  may ever get credit for.